Drawing inspiration from Dada methods, you will create poems, portraits and films exploring chance and the (re)combination of existing images and text to create new surreal creations.

In the Dada manifesto of 1918, proclaiming his ‘Dadaist disgust’, Tristan Tzara (1896-1963) wrote, ‘DADA DOES NOT MEAN ANYTHING’ (Seven Dada Manifestoes and Lampisteries, Tzara, Calder Publications, 1992, p4)

But let us see what Tzara meant by that… Dada emerged in Zurich in 1916 at the Cabaret Voltaire, as a reaction to the catastrophe, horror and destruction of WWI. It was not an art movement, but a revolt against all that bourgeois civilisation had achieved and held dear, lampooning bourgeois values of Family, Fatherland, Art, Culture, Religion and so on. Asserting that, ‘there is a great negative work of destruction to be accomplished’ (ibid, p12), the Dadaists set about clearing the decks, sweeping away the debris.

What’s the point of Dada now?

Dada has been used by artists over the last 100 years to explore media, culture and the subconscious. Each of the activities below has at least one artist who has drawn on these ideas.

The Dadaist cut-out poem is a practical application of the Dada ideas. It is an approach which uses chance to create new images, ideas, and texts, which ridicules the notion of the ‘specialist’ poet.  In 1920 Tzara wrote ‘To Make A Dadaist Poem’, in which he sets out how this can be applied: 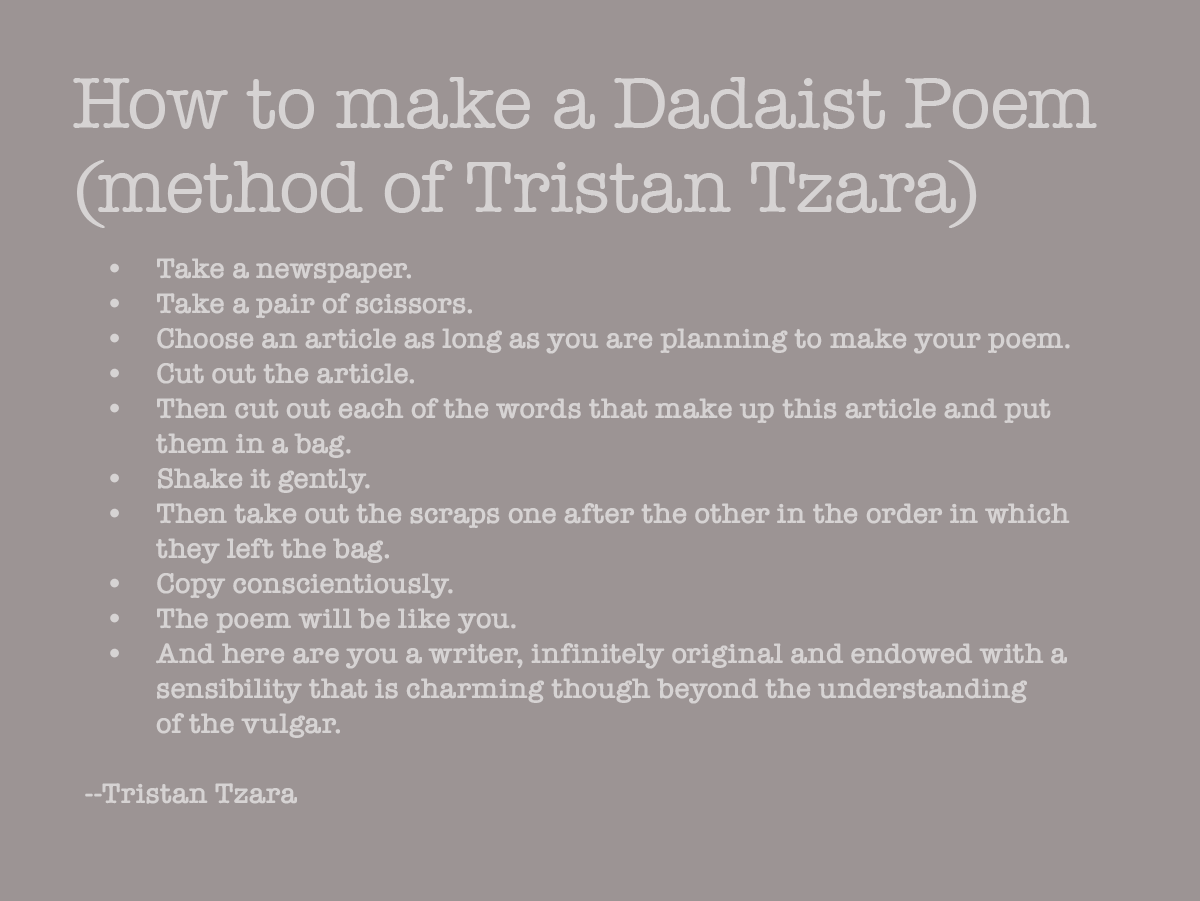 1. Take one small article from a newspaper or magazine

2. Cut out a selection of words

3. Mix the words in a bag or in your hand

4. Without looking, pull out words and lay them on a piece of card or paper in the order you take them out of the bag

5. Fix your words on to the paper using glue stick or sticky tape

William S. Burroughs (1914-1997), a postmodern author, moved to Paris in the 1960’s where he met a painter named Brion Gysin (1916-1986). The two of them are often credited for popularising cut-up theory derived from Triztan Tzara’s Dada experiments. One of their methods consisting of folding existing texts to create a new artwork. 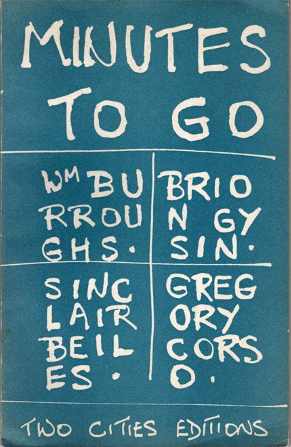 1. Take two articles – or two columns of the same article

2. Make a fold in one and place over the other 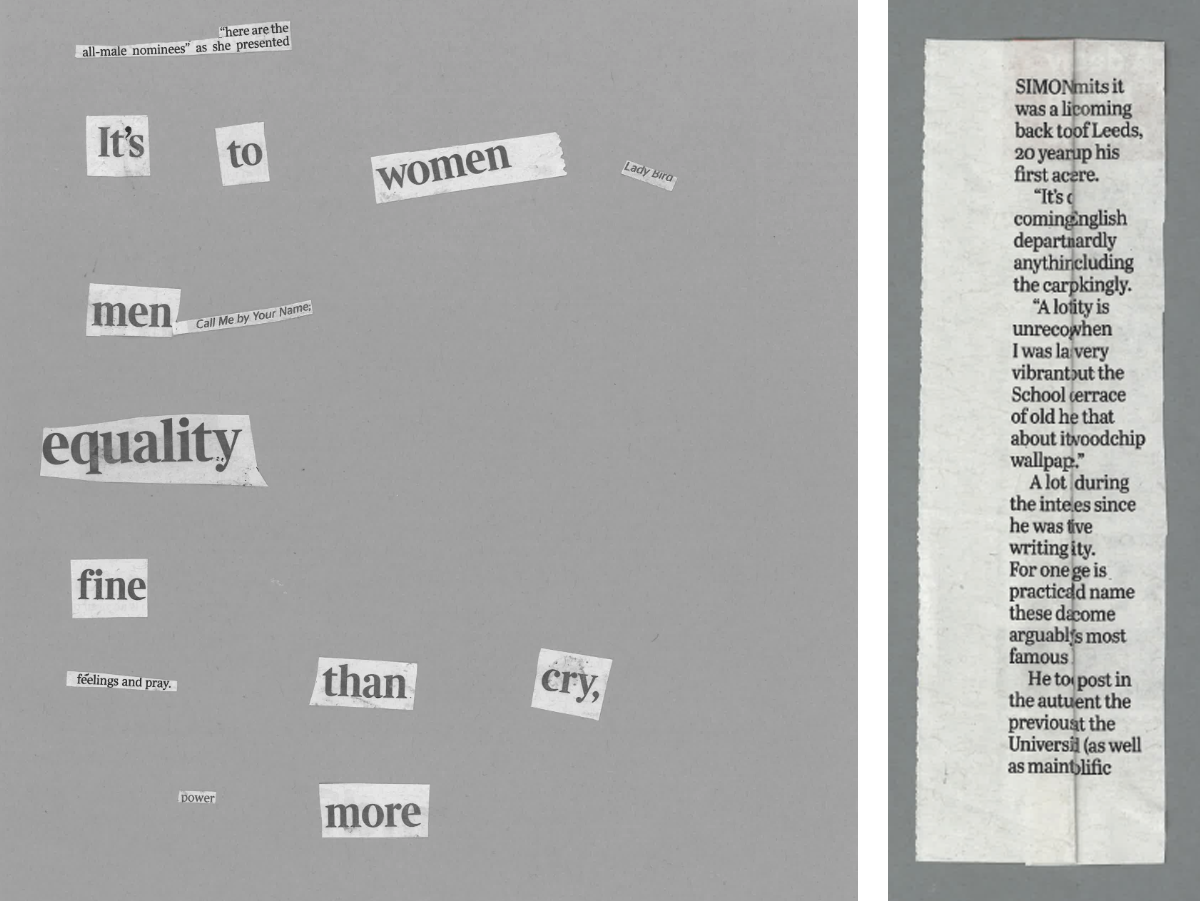 Submit your poems or post online and tag @natsatclub and @uolartsoutreach

Lubaina Himid (born 1954) is a British contemporary artist and curator born in the Sultanate of Zanzibar. She is a professor of contemporary art at the University of Central Lancashire in the north-west of England. Her art focuses on themes of cultural history and reclaiming identities.

She was one of the first artists involved in the Black Art movement in the 1980s and continues to create activist art, which is shown in galleries worldwide. Himid was appointed MBE in June 2010 for “services to black women’s art” and won the Turner Prize in 2017.

Himid’s collaged portraits take images from magazines and recombine them to make new faces, using and reworking the material of everyday life in order to explore black identity. 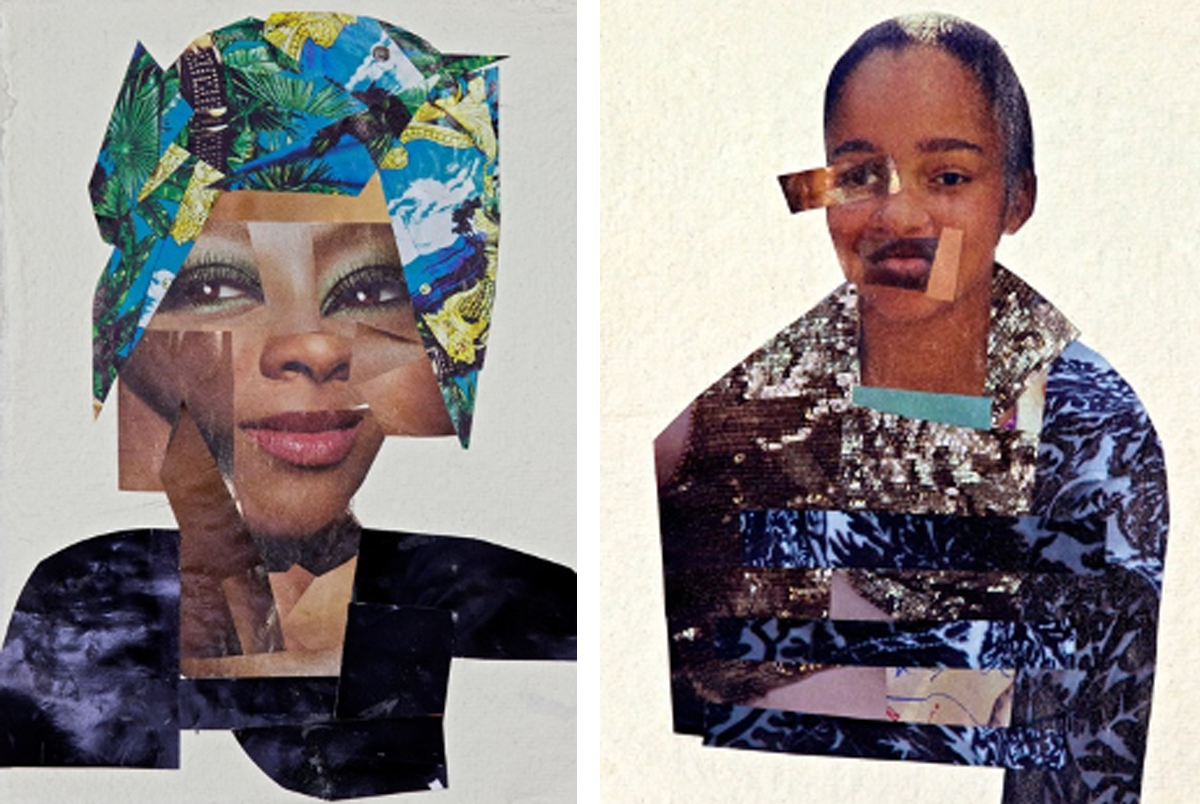 1. Select 2-3 images of faces from a magazine/newspaper

2. Cut out features from the different faces and re-combine to create a new portrait

3. Fix your portrait to card or paper using glue or sticky tape 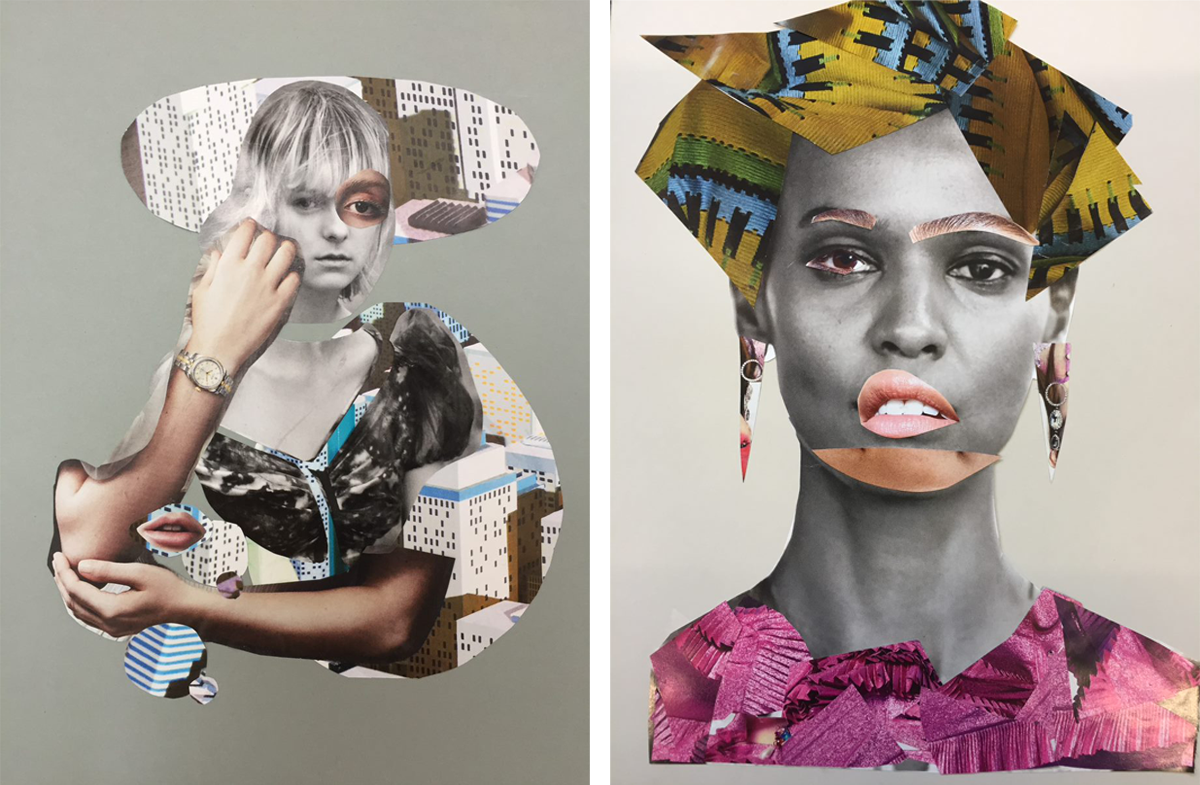 Submit your portrait or post online and tag @natsatclub and @uolartsoutreach

Nat Raha is a poet and trans/queer activist-scholar, living in Edinburgh, Scotland.

Her research addresses sexuality and gender, critical theory and contemporary poetry and poetics, through creative and critical methods.

She is the author of three collections and numerous pamphlets of poetry. Her work contains a mixture of cut-outs and her own text, either typed or handwritten. Raha’s text compositions are often striking with multiple layers (does text in the background become part of the poem?) and contrasting angles (does this mean something? Does this alter how we might read the piece?). 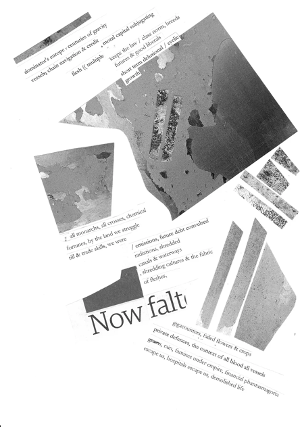 Hannah Höch (1889–1978) was a German Dada artist who pioneered the use of photomontage.

Höch appropriated and recombined images and text from mass media to critique popular culture. Her provocative compositions explored Weimar-era perceptions of gender, ethnicity and politics. Höch’s juxtaposition and layering of image and text create complex and striking images brimming with stories and meanings for us to reveal. 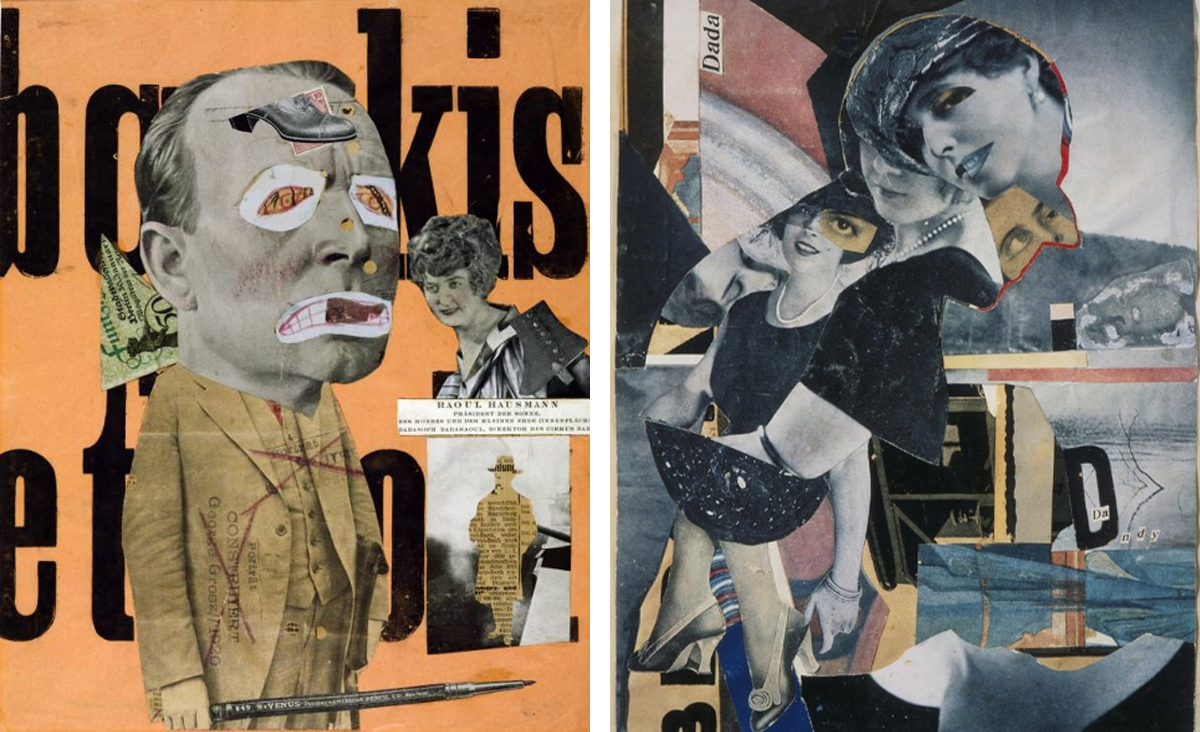 Submit your images or post online and tag @natsatclub and @uolartsoutreach

Make your cut-ups come alive by creating a stop-motion animation.

You can find free stop motion apps to download to your smartphone,
eg ‘Stop Motion’ Apple/Android

Thank you for taking part in the University of Leeds Art&Design Saturday Club Workshop.

Submit your final poems, portraits and animations or post online and tag @natsatclub and @uolartsoutreach

Find out more about the University of Leeds Saturday Club on our website (artsoutreach.leeds.ac.uk) and see more of our Club members artwork on Instagram @uolartsoutreach

Sarah is the Outreach and Saturday Club Project Officer at the University of Leeds and delivers the Club in partnership with the School of Fine Art, History of Art and Cultural Studies.

She has a background in gallery education and has previously worked at visual arts organisations including The Hepworth Wakefield and Pavilion, Leeds. Sarah is passionate about art, arts education and widening participation.

“It’s such an honour to be part of this fantastic project and to see our member’s confidence and creativity grow over the course of the year.”