A message from Antony Gormley:

I want you to try and have a go at something that I love doing.

I’ve been making these little body forms for a few years now, I’m still making them, but now at full scale.

It’s often a bit daunting to try and make a whole body in clay, so I’ve broken the body down into bits. Here are a few examples of things that I’ve tried over the last little while: 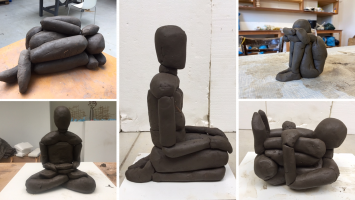 The main thing is, just have a go, and see how you do.

There are no rules, but by making the body in fifteen or more bits, you can just get a feel for the clay and then see what comes out!

To get started, you will need:

Now it’s your turn to create a body form sculpture. When you’re finished, take a photo and click the button below to show us what you’ve created.

Antony Gormley (b.1950) is widely acclaimed for his sculptures, installations and public artworks that investigate the relationship of the human body to space. His work has developed the potential opened up by sculpture since the 1960s through a critical engagement with both his own body and those of others in a way that confronts fundamental questions of where human beings stand in relation to nature and the cosmos. Gormley continually tries to identify the space of art as a place of becoming in which new behaviours, thoughts and feelings can arise.

Antony Gormley’s permanent public works include the Angel of the North (Gateshead, England), Another Place(Crosby Beach, England), Exposure (Lelystad, The Netherlands) and Chord (MIT – Massachusetts Institute of Technology, Cambridge, MA, USA). Gormley won the Turner Prize in 1994 and has been a member of the Royal Academy since 2003. He was made an Officer of the British Empire in 1997 and knighted in 2014.

Learn how to dye fabric naturally and 'upcycle' old garments